From POV-Wiki
Jump to navigation Jump to search

interior and exterior specify special coloring algorithms. You can specify one of them or both at the same time. They only work with the fractal patterns.
EXTERIOR_TYPE is integer value between 0 and 8 (inclusive) and INTERIOR_TYPE is integer value between 0 and 6 (inclusive). When not specified, the default value of INTERIOR_TYPE is 0 and for EXTERIOR_TYPE 1.
FACTOR is a float. Unless specified otherwise, the return value of the pattern is multiplied by FACTOR before returning it. This can be used to scale the value range of the pattern when using interior and exterior coloring (this is often needed to get the desired effect). The default value of FACTOR is 1.

The different values of EXTERIOR_TYPE and INTERIOR_TYPE have the following meaning: 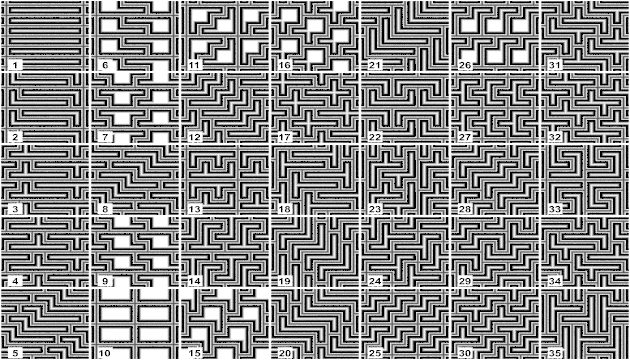 There is no nomenclature for pattern, they are just numbered from 1 to the maximum relevant value.

form
0, 1 or 2, a special 3 is allowed for square only which copy the look of interior for some additional variations.
interior
0, 1 or 2
exterior
0, 1 or 2; Not used for hexagon.

The form, exterior and interior specify the look of angle used for respectively slow convex (turning side), quick convex (pointy tile) and concave angle (interior angle between many tiles).