There are a couple limitations to all of the special textures we have seen (from textures, pigment and normal maps through material maps). First, if we have used the default directive to set the default texture for all items in our scene, it will not accept any of the special textures discussed here. This is really quite minor, since we can always declare such a texture and apply it individually to all objects. It does not actually prevent us from doing anything we could not otherwise do.

The other is more limiting, but as we will shortly see, can be worked around quite easily. If we have worked with layered textures, we have already seen how we can pile multiple texture patterns on top of one another (as long as one texture has transparency in it). This very useful technique has a problem incorporating the special textures we have just seen as a layer. But there is an answer!

For example, say we have a layered texture called Speckled_Metal, which produces a silver metallic surface, and then puts tiny specks of rust all over it. Then we decide, for a really rusty look, we want to create patches of concentrated rust, randomly over the surface. The obvious approach is to create a special texture pattern, with transparency to use as the top layer. But of course, as we have seen, we would not be able to use that texture pattern as a layer. We would just generate an error message. The solution is to turn the problem inside out, and make our layered texture part of the texture pattern instead, like this

And the ultimate effect is the same as if we had layered the rust patches on to the speckled metal anyway.

With the full array of patterns, pigments, normals, finishes, layered and special textures, there is now practically nothing we cannot create in the way of amazing textures. An almost infinite number of new possibilities are just waiting to be created!

You know you have been raytracing too long when ...
... You want to cheat and look at nature's source code.
-- Mark Stock

POV-Ray offers a variety of atmospheric effects, i. e. features that affect the background of the scene or the air by which everything is surrounded.

It is easy to assign a simple color or a complex color pattern to a virtual sky sphere. You can create anything from a cloud free, blue summer sky to a stormy, heavy clouded sky. Even starfields can easily be created.

You can use different kinds of fog to create foggy scenes. Multiple fog layers of different colors can add an eerie touch to your scene.

A much more realistic effect can be created by using an atmosphere, a constant fog that interacts with the light coming from light sources. Beams of light become visible and objects will cast shadows into the fog.

Last but not least you can add a rainbow to your scene.

The background feature is used to assign a color to all rays that do not hit any object. This is done in the following way.

The background color will be visible if a sky sphere is used and if some translucency remains after all sky sphere pigment layers are processed.

The sky_sphere can be used to easily create a cloud covered sky, a nightly star sky or whatever sky you have in mind.

In the following examples we will start with a very simple sky sphere that will get more and more complex as we add new features to it.

Creating a Sky with a Color Gradient

Beside the single color sky sphere that is covered with the background feature the simplest sky sphere is a color gradient. You may have noticed that the color of the sky varies with the angle to the earth's surface normal. If you look straight up the sky normally has a much deeper blue than it has at the horizon.

We want to model this effect using the sky sphere as shown in the scene skysph1.pov below.

The interesting part is the sky sphere statement. It contains a pigment that describes the look of the sky sphere. We want to create a color gradient along the viewing angle measured against the earth's surface normal. Since the ray direction vector is used to calculate the pigment colors we have to use the y-gradient.

The colors for all other positions are interpolated between those two colors as you can see in the resulting image. 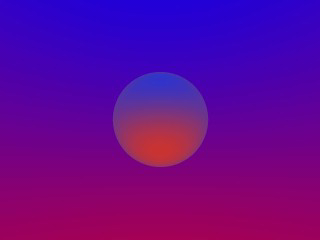 If you want to start one of the colors at a specific angle you will first have to convert the angle to a color map index. This is done by using the formula color_map_index = (1 - cos(angle)) / 2 where the angle is measured against the negated earth's surface normal. This is the surface normal pointing towards the center of the earth. An angle of 0 degrees describes the point below us while an angle of 180 degrees represents the zenith.

In POV-Ray you first have to convert the degree value to radians as it is shown in the following example.

This scene uses a color gradient that starts with a red color at 30 degrees and blends into the blue color at 120 degrees. Below 30 degrees everything is red while above 120 degrees all is blue.

In the following example we will create a sky with a red sun surrounded by a red color halo that blends into the dark blue night sky. We will do this using only the sky sphere feature.

The sky sphere we use is shown below. A ground plane is also added for greater realism (skysph2.pov).

The gradient pattern and the transformation inside the pigment are the same as in the example in the previous section.

The color map consists of three colors. A bright, slightly yellowish red that is used for the sun, a darker red for the halo and a dark blue for the night sky. The sun's color covers only a very small portion of the sky sphere because we do not want the sun to become too big. The color is used at the color map values 0.000 and 0.002 to get a sharp contrast at value 0.002 (we do not want the sun to blend into the sky). The darker red color used for the halo blends into the dark blue sky color from value 0.002 to 0.200. All values above 0.200 will reveal the dark blue sky.

The rotate -135*x statement is used to rotate the sun and the complete sky sphere to its final position. Without this rotation the sun would be at 0 degrees, i.e. right below us. 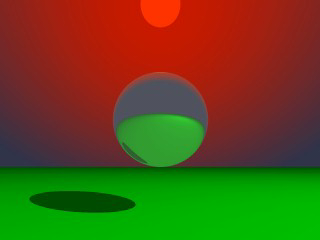 Looking at the resulting image you will see what impressive effects you can achieve with the sky sphere.

To further improve our image we want to add some clouds by adding a second pigment. This new pigment uses the bozo pattern to create some nice clouds. Since it lays on top of the other pigment it needs some transparent colors in the color map (look at entries 0.5 to 1.0). 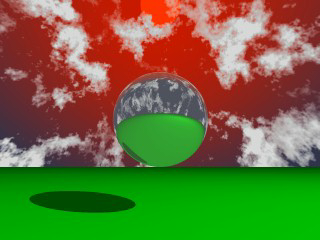 The sky sphere has one drawback as you might notice when looking at the final image (skysph3.pov). The sun does not emit any light and the clouds will not cast any shadows. If you want to have clouds that cast shadows you will have to use a real, large sphere with an appropriate texture and a light source somewhere outside the sphere.

You can use the fog feature to add fog of two different types to your scene: constant fog and ground fog. The constant fog has a constant density everywhere while the ground fog's density decreases as you move upwards.

The usage of both fog types will be described in the next sections in detail.

The simplest fog type is the constant fog that has a constant density in all locations. It is specified by a distance keyword which actually describes the fog's density and a fog color.

The distance value determines the distance at which 36.8% of the background is still visible (for a more detailed explanation of how the fog is calculated read the reference section "Fog").

The fog color can be used to create anything from a pure white to a red, blood-colored fog. You can also use a black fog to simulate the effect of a limited range of vision.

The following example will show you how to add fog to a simple scene (fog1.pov).

According to their distance the spheres in this scene more or less vanish in the greenish fog we used, as does the checkerboard plane.

If you want to make sure that the background does not completely vanish in the fog you can set the transmittance channel of the fog's color to the amount of background you always want to be visible.

Using as transmittance value of 0.2 as in

the fog's translucency never drops below 20% as you can see in the resulting image (fog2.pov). 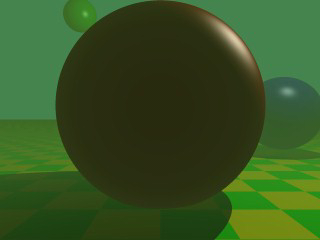 The greenish fog we have used so far does not filter the light passing through it. All it does is to diminish the light's intensity. We can change this by using a non-zero filter channel in the fog's color (fog3.pov). 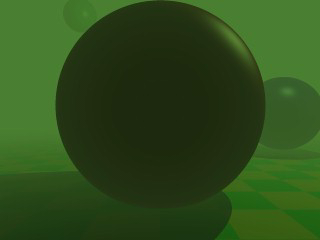 You will notice that the intensity of the objects in the fog is not only diminished due to the fog's color but that the colors are actually influenced by the fog. The red and especially the blue sphere got a green hue.

Adding Some Turbulence to the Fog

In order to make our somewhat boring fog a little bit more interesting we can add some turbulence, making it look like it had a non-constant density (fog4.pov). 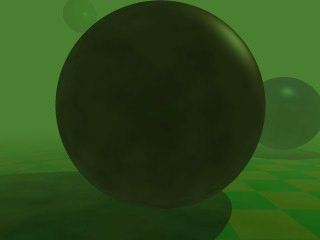 The turbulence keyword is used to specify the amount of turbulence used while the turb_depth value is used to move the point at which the turbulence value is calculated along the viewing ray. Values near zero move the point to the viewer while values near one move it to the intersection point (the default value is 0.5). This parameter can be used to avoid noise that may appear in the fog due to the turbulence (this normally happens at very far away intersection points, especially if no intersection occurs, i. e. the background is hit). If this happens just lower the turb_depth value until the noise vanishes.

You should keep in mind that the actual density of the fog does not change. Only the distance-based attenuation value of the fog is modified by the turbulence value at a point along the viewing ray.

The much more interesting and flexible fog type is the ground fog, which is selected with the fog_type statement. Its appearance is described with the fog_offset and fog_alt keywords. The fog_offset specifies the height, i. e. y value, below which the fog has a constant density of one. The fog_alt keyword determines how fast the density of the fog will approach zero as one moves along the y axis. At a height of fog_offset+fog_alt the fog will have a density of 25%.

The following example (fog5.pov) uses a ground fog which has a constant density below y=25 (the center of the red sphere) and quickly falls off for increasing altitudes. 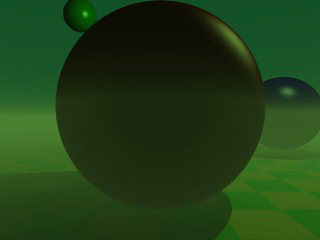