It is possible to use several layers of fog by using more than one fog statement in your scene file. This is quite useful if you want to get nice effects using turbulent ground fogs. You could add up several, differently colored fogs to create an eerie scene for example. 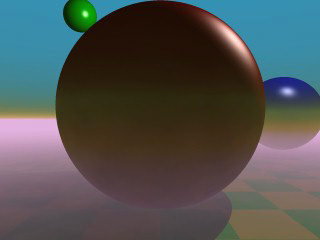 Whenever you use the fog feature and the camera is inside a non-hollow object you will not get any fog effects. For a detailed explanation why this happens see "Empty and Solid Objects".

In order to avoid this problem you have to make all those objects hollow by either making sure the camera is outside these objects (using the inverse keyword) or by adding the hollow to them (which is much easier).

The rainbow feature can be used to create rainbows and maybe other more strange effects. The rainbow is a fog like effect that is restricted to a cone-like volume.

Starting With a Simple Rainbow

The rainbow is specified with a lot of parameters: the angle under which it is visible, the width of the color band, the direction of the incoming light, the fog-like distance based particle density and last but not least the color map to be used.

The color map is the crucial part of the rainbow since it contains all the colors that normally can be seen in a rainbow. The color of the innermost color band is taken from the color map entry 0 while the outermost band is take from entry 1. You should note that due to the limited color range any monitor can display it is impossible to create a real rainbow. There are just some colors that you cannot display.

The filter channel of the rainbow's color map is used in the same way as with fogs. It determines how much of the light passing through the rainbow is filtered by the color.

The following example shows a simple scene with a ground plane, three spheres and a somewhat exaggerated rainbow (rainbow1.pov).

Some irregularity is added to the color bands using the jitter keyword. 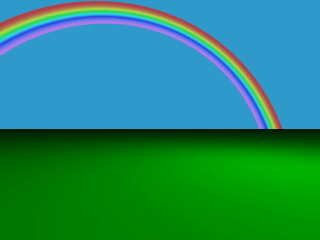 The rainbow in our sample is much too bright. You will never see a rainbow like this in reality. You can decrease the rainbow's colors by decreasing the RGB values in the color map.

The result we have so far looks much too bright. Just reducing the rainbow's color helps but it is much better to increase the translucency of the rainbow because it is more realistic if the background is visible through the rainbow.

We can use the transmittance channel of the colors in the color map to specify a minimum translucency, just like we did with the fog. To get realistic results we have to use very large transmittance values as you can see in the following example (rainbow2.pov).

The transmittance values increase at the outer bands of the rainbow to make it softly blend into the background. 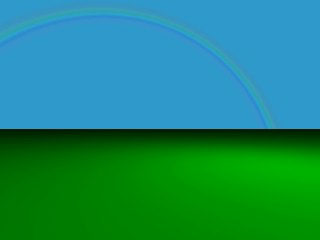 The resulting image looks much more realistic than our first rainbow.

Currently our rainbow has a circular shape, even though most of it is hidden below the ground plane. You can easily create a rainbow arc by using the arc_angle keyword with an angle below 360 degrees.

If you use arc_angle 120 for example you will get a rainbow arc that abruptly vanishes at the arc's ends. This does not look good. To avoid this the falloff_angle keyword can be used to specify a region where the arc smoothly blends into the background.

In the following examples we use an 120 degrees arc with a 45 degree falloff region on both sides of the arc (rainbow3.pov).

The arc angles are measured against the rainbows up direction which can be specified using the up keyword. By default the up direction is the y-axis. 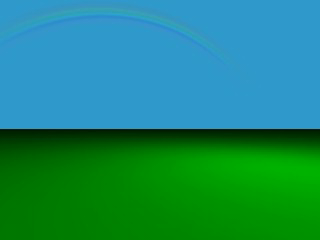 We finally have a realistic looking rainbow arc.

Media in POV-Ray is a very versatile feature and can be used for a very diverse set of special effects such as glows, smoke, dust, fog, etc. However, due to its versatility, media is not one of the easiest and simplest features of POV-Ray and often requires experience for getting things to look good.

There are three types of media in POV-Ray: Emitting, absorbing and scattering. They have the following properties:

Scattering media is the more advanced and slower type. It is somewhat similar to absorbing media except that it is fully lit by light sources. This can be used for smoke or fog with visible lightbeams and shadows.

Media can be global to the whole universe, or it can be contained by an object. In the latter case the media is defined in the interior block of the object definition.

If media is defined in the interior of an object or as a global media it will have a constant density throughout the object/universe. However, a density pattern can be specified for non-uniform media. Also all kinds of transformations can be applied to the media. This is specially useful for various effects (such as smoke with certain shape).

Let's start with a very simple scene showing an emitting media using a spherical density map. Emitting media is used with the emission keyword followed by a color value. This color value tells the overall color of the media:

Note that the spherical pattern gets values from 0 in the outer surface of a unit sphere to 1 in the origin (that is, the density with the index value 1 will be the density at the center of the media).

The color values in the density map tell what color the media is emitting at a certain point in the pattern. That is, for example when the pattern gets the value 0.4, the media will be completely red at that place. If the color is <0,0,0>, it means that the media does not emit any light at all in that location.

Thus, this will give us a media with a bright white center which fades to yellow and red at the outer limits of the unit sphere: 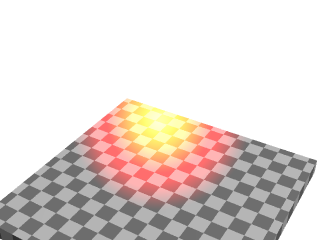 As you can see from the image, the emitting media is invisible against white background. This is due to its additive nature (any color added to pure white gives pure white). In fact, emitting media gives usually best results for dark backgrounds.

Modifying the previous example to use absorbing media is rather simple: Simply change the emission keyword for absorption. However, the colors we used above are not very illustrative for absorbing media, so let's change them a bit like this: 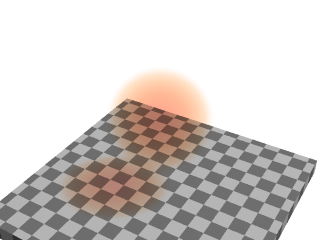 Note how this media has a shadow: light rays passing through the media are absorbed.

Because of its substractive nature, absorbing media works well with light backgrounds and not very well with dark ones.

Since scattering media fully takes light sources into account we need to make a slightly more complex scene to see this. Let's modify the above example by replacing the sphere with a box containing evenly distributed scattering media, and a cylinder which will cast a shadow onto the media: 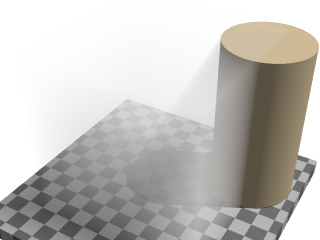 (The effect may look a bit unnatural for a fog effect because the media is contained inside a box and the cylinder is partially out of this box, but this is done to better visualize what is happening.)

The second parameter is the overall color of the media, similar to the parameter of the other two media types.

An optional third parameter can be given with the extinction keyword inside the curly brackets. This keyword controls how fast the scattering media absorbs light and has to be used sometimes to get the desired effect, such as when the media absorbs too much light.

Tip: If you are getting a really dense or dark scattering media, try different values for the color and the extinction value (usually values between 0 and 1). It is usually enough to play with these two values to get the desired effect.