Will POV-Ray render faster if I buy the latest and fastest 3D videocard?

This means that you can't use a 3D-card to speed up raytracing (even if you wanted to do so). Raytracing makes lots of float number calculations, and this is very FPU-consuming. You will get much more speed with a very fast FPU than a 3D-card.

What raytracing does is actually this: Calculate 1 pixel color and (optionally) put it on the screen. You will get little benefit from a fast videocard since only individual pixels are drawn on screen.

How do I increase rendering speed?

This question can be divided into 2 questions:

1) What kind of hardware should I use to increase rendering speed?

The truth is the computations needed for rendering images are both complex and time consuming. This is one of the few program types that will actualy put your processors FPU to maximum use.

The things that will most improve speed, roughly in order of appearance, are:

2) How should I make the POV-Ray scenes so that they will render as fast as possible?

These are some things which may speed up rendering without having to compromise the quality of the scene:

How do the different kinds of CSG objects compare in speed? How can I speed them up?

There is a lot of misinformation about CSG speed out there. A very common allegation is that merge is always slower than union. This statement is not true. Merge is sometimes slower than union, but in some cases it's even faster. For example, consider the following code:

There are 20 semitransparent merged spheres there. A test render took 64 seconds. Substituting merge with union took 352 seconds to render (5.5 times longer). The difference in speed is very notable.

So why is merge so much faster than union in this case? Well, the answer is probably that the number of visible surfaces play a very important role in the rendering speed. When the spheres are unioned there are 18 inner surfaces, while when merged, those inner surfaces are gone. POV-Ray has to calculate lighting and shading for each one of those surfaces and that makes it so slow. When the spheres are merged, there's no need to perform lighting and shading calculations for those 18 surfaces.

Another common allegation is difference is very slow; much slower than union. This can also be proven as a false statement. Consider the following example:

This scene took 42 seconds to render, while substituting the difference with a union took 59 seconds (1.4 times longer).

The crucial thing here is the size of the surfaces on screen. The larger the size, the slower to render (because POV-Ray has to do more lighting and shading calculations).

But the second statement is much closer to the truth than the first one: differences are usually slow to render, specially when the member objects of the difference are very much bigger than the resulting CSG object. This is because POV-Ray's automatic bounding is not perfect. A few words about bounding:

Suppose you have hundreds of objects (like spheres or whatever) forming a bigger CSG object, but this object is rather small on screen (like a little house for example). It would be really slow to test ray-object intersection for each one of those objects for each pixel of the screen. This is speeded up by bounding the CSG object with a bounding shape (such as a box). Ray-object intersections are first tested for this bounding box, and it is tested for the objects inside the box only if it hits the box. This speeds rendering considerably since the tests are performed only in the area of the screen where the CSG object is located and nowhere else.

Since it's rather easy to automatically calculate a proper bounding box for a given object, POV-Ray does this and thus you don't have to do it by yourself.

But this automatic bounding is not perfect. There are situations where a perfect automatic bounding is very hard to calculate. One situation is the difference and the intersection CSG operations. POV-Ray does what it can, but sometimes it makes a pretty poor job. This can be specially seen when the resulting CSG object is very small compared to the CSG member objects. For example:

In this example the member objects extend from <-2001,-1001,-1001> to <2001,1001,1001> although the resulting CSG object is a pretty small lens-shaped object which is only 2 units wide in the x direction and perhaps 10 or 20 or something wide in the y and z directions. As you can see, it's very difficult to calculate the actual dimensions of the object (but not impossible).

In this type of cases POV-Ray makes a huge bounding box which is useless. You should bound this kind of objects by hand (specially when the it has lots of member objects). This can be done with the bounded_by keyword.

Here is an example:

This took 51 seconds to render. Commenting out the bounded_by line increased the rendering time to 231 seconds (4.5 times slower).

No, and most likely never will.

There are several good reasons for this:

Note: There are a few things in POV-Ray that use single precision math (such as color handling). This is one field where some optimization might be possible without degrading the image quality.

I would like to suggest some new features for the program. Who should I talk to?

This is best discussed on the POV-Ray news groups (news.povray.org) in both the general news group and the windows news group. The POV-team does skim through the message posted there and occasionally implement ideas that have been posted by users.

When I render a height field I get lots of warning messages Illegal grid value in dda_traversal(). How can I correct that?

Basically, you have a ray going between the cracks of the height field due to an arithmetic accuracy problem. Sometimes it does no harm. Sometimes you get black dot or line artifacts. I know of no successful patch so far. I also know no completely reliable workaround. The best bet is to slightly joggle the camera position and/or angle.

How can I get rid of the beep after POV-Ray has calculated the image?

Usually using the -P command-line option should help (POV-Ray will not pause after it has calculated the image). If you are using the windows version of POV-Ray, you can try Render -> On Completion -> Remove [v] in front of Beep.

Are there any POV-Ray viruses out there? Can one be done?

At the time of writing this documentation, no known viruses or trojans made with the POV-Ray Scene Description Language (SDL) are known to exist.

Due to the properties of the POV-Ray SDL, writing a working virus (that is, a piece of code which spreads, without the user knowing, by copying itself to non-infected files) is very difficult, if not impossible to do. The main obstacle in making a POV-Ray virus is that there's no way for the SDL code to reside in memory, infecting files when it sees them; another problem is that there's no way to get file listings in the POV-Ray SDL, so the code can't infect other .pov files at parse time.

However, trojans (i.e. a malicious piece of code which attempts to harm the system, but won't infect other files) are much more likely. It is possible with the POV-Ray SDL to open a file and write practically anything to it. This can be used to cause severe damage to an unprotected file system.

Regardless of this, it's always a good idea to run only scripts which you have received from trusted sources. This is particularly true if you are using a version of POV-Ray older than 3.5.

The POV-Ray community consists mostly of benevolent people and it is generally safe to try POV-Ray scripts made by them. However, it is often better to be safe than to be sorry.

I'm getting a "error in Help file - contact your vendor" error.

This is a known problem which happens to some people (although not all) and not easy to fix. The following is a tip from the povray.org page:

This is an article by Rob Rippengale giving more tips:

Does POV-Ray for Unix have a GUI like in Windows?

POV-Ray has always been a command-line utility. Even the core code of POV-Ray for Windows is exactly the same as the generic command-line POV-Ray. The graphical interfaces of the Windows and Mac versions of POV-Ray are exclusive to them (and non-portable). They are much like separate add-ons.

There's no official GUI done for the Unix version of POV-Ray. Some third-parties have tried to make some GUIs for it (and you might find them from the POV-Ray Links page) but it seems to be a general phenomenon that Unix people like to use just the command-line version with a proper and powerful text editor (such as Emacs).

I'm sorry but there's no advice right now here about how to configure Emacs in order to smoothly handle POV-Ray file editing, but I might write a page about that some day, when I have the time. 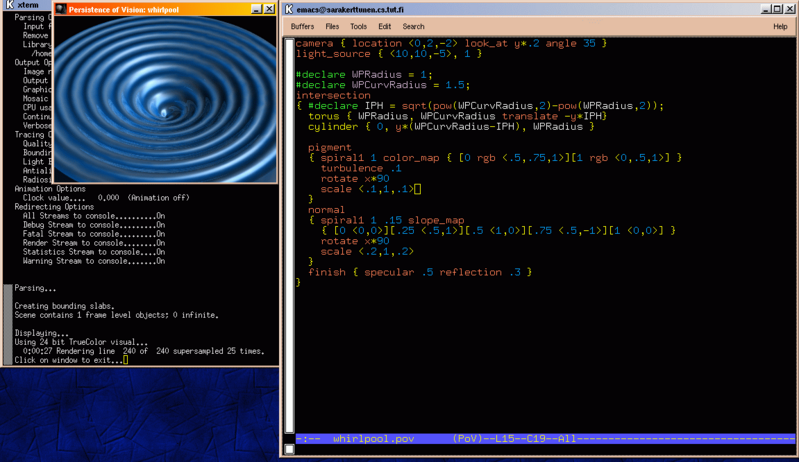 End of Section: Go Back to the Table of Contents